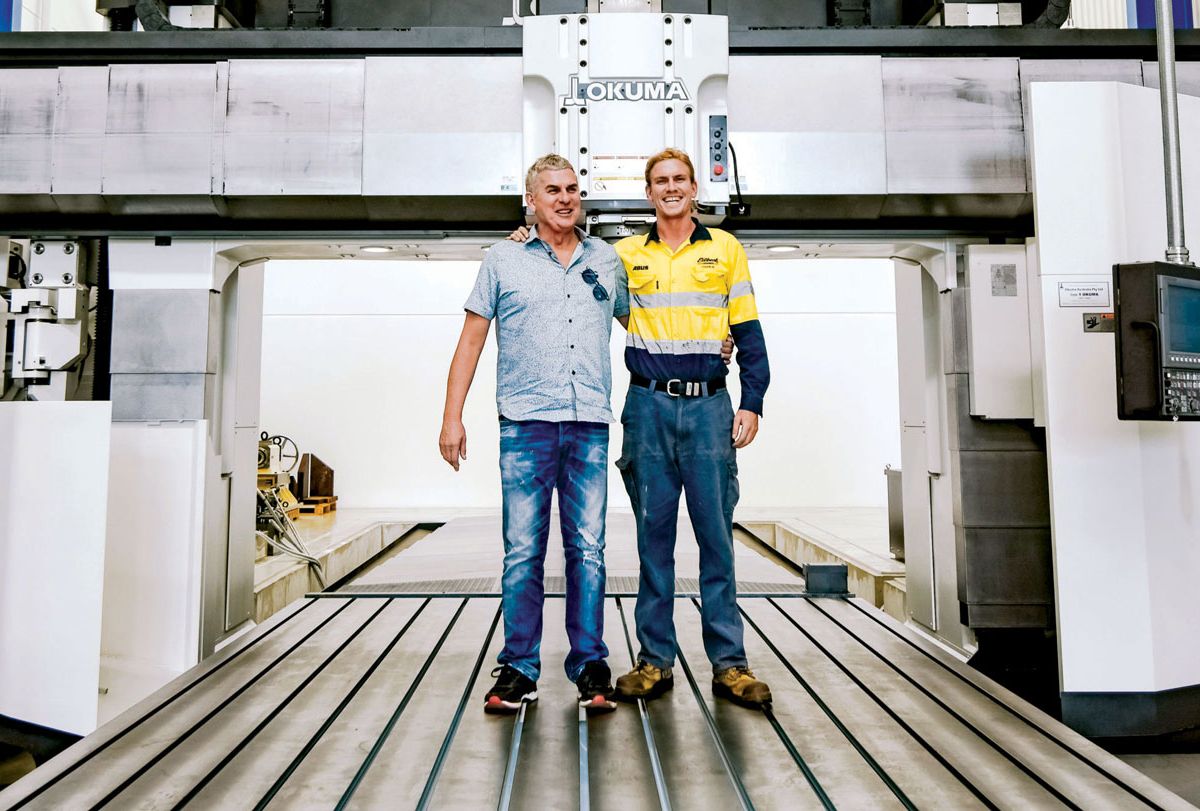 Charlie Eilbeck heads the machining business of Eilbeck Cranes, the parent company which commands 75% of the bespoke overhead crane market in Australia. The machining division opened in 2015 at the site we are touring, which has done well enough to grow its headcount to 40 and open a second workshop (also in Ingleburn). Eilbeck Heavy Machining (EHM) has brought more and more crane component manufacturing in-house, and gone about chasing projects outside of the company.

“Building these machine shops has a lot to do with the passion of my father, Tom, because he’s a fitter and turner, and he worked in one growing up. So machine shops allow us to be a very flexible business, but they also come from his heart,” explains the younger Eilbeck.

“A lot of what we do is driven by passion. We’re not a public company driven by a board of directors where we have to justify when we want to spend three million dollars on a mill. We see opportunity, and we see opportunity in Australia.” 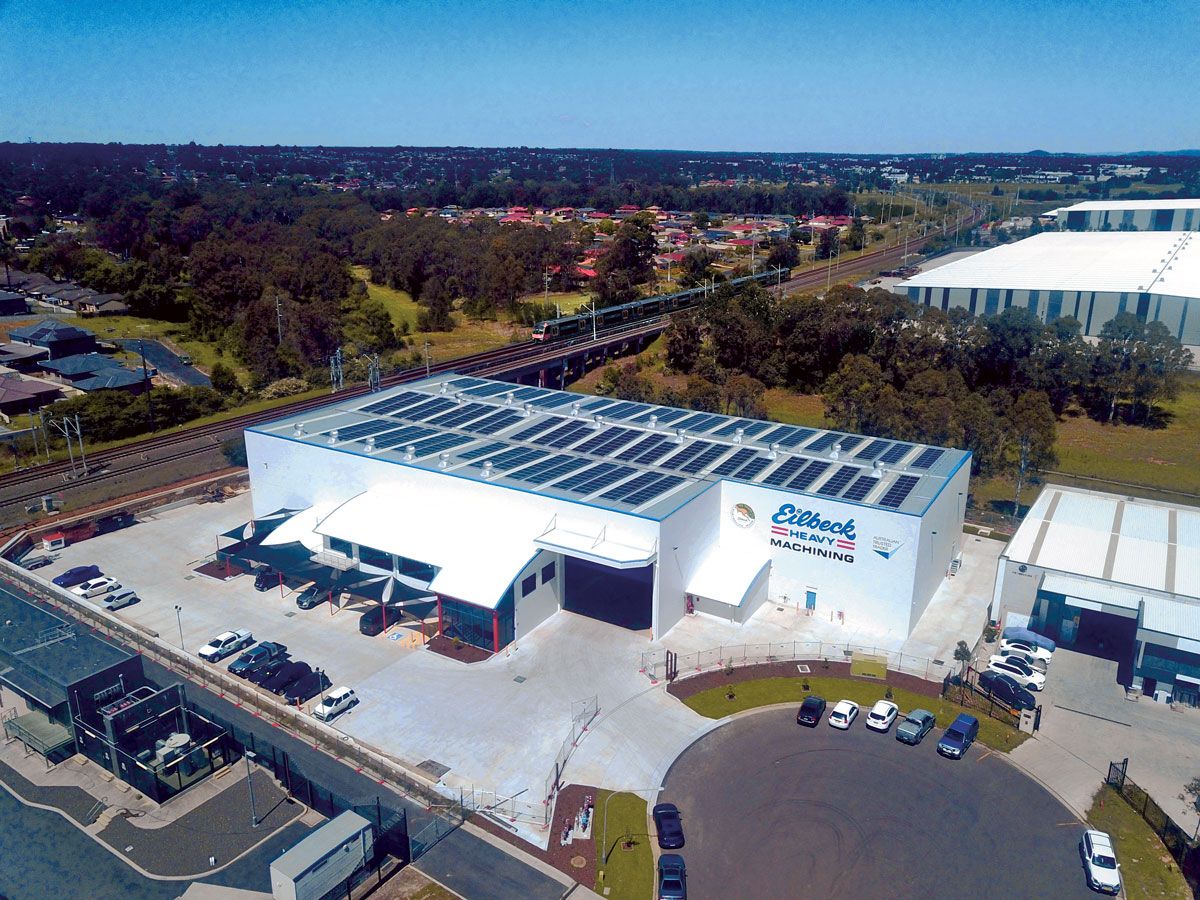 If there’s a couple-paragraph distillation of Eilbeck’s ethos – which he shares eagerly through a freewheeling, no-notes presentation on the company’s history, a tour of the original EHM site with a Q&A, and many extensive asides during both – then that might be it. There’s heritage and a determination to build on it, there’s opportunity, there’s pride, there’s risk, but importantly, there’s a willingness to back the family business.

We pull up next to an Okuma MCR A5CII, a further demonstration of all of the above, then another peek into the culture of the company. The double-column machining centre was a serious investment, and one big chunk of the $10m the company has spent with the Japanese CNC specialist in the last five years. It was also a leap of faith. But it’s worked out for Eilbeck and his team.

“When we bought this, people told us we were mad. We didn’t really have the work for it… We bought it without a plan and without a doubt it’s now our busiest machine,” he explains.

“We do a lot of bogies for the railway industry… we gain efficiencies with head changing, tool changing, machine output in terms of the power and capacity and the rigidity. Okuma makes 45 of these double-column machines a month at their factory. And when we bought this, we said we’d only do it if we could bring all our tradesmen on Business Class to Japan. And they did.”

There is no shortage of challenges to running any kind of manufacturing business in Australia, and that certainly goes for heavy engineering.

One thing that stands out during the visit is the emphasis on staff, whether they’re being sent to Japan or kept happy back at Ingleburn, in the manufacturing heartland southwest of Sydney.

The capital and the staff aren’t cheap. The competition from imports is strong. Many of the raw products that come in to be machined can’t be made locally, and the international supply chain challenges of this era are well-known. But the biggest issue is around attracting help.

“The workload is there but the people aren’t,” is the essence of it.

Fortunately, only one member has left the EHM team since the division opened in 2015. 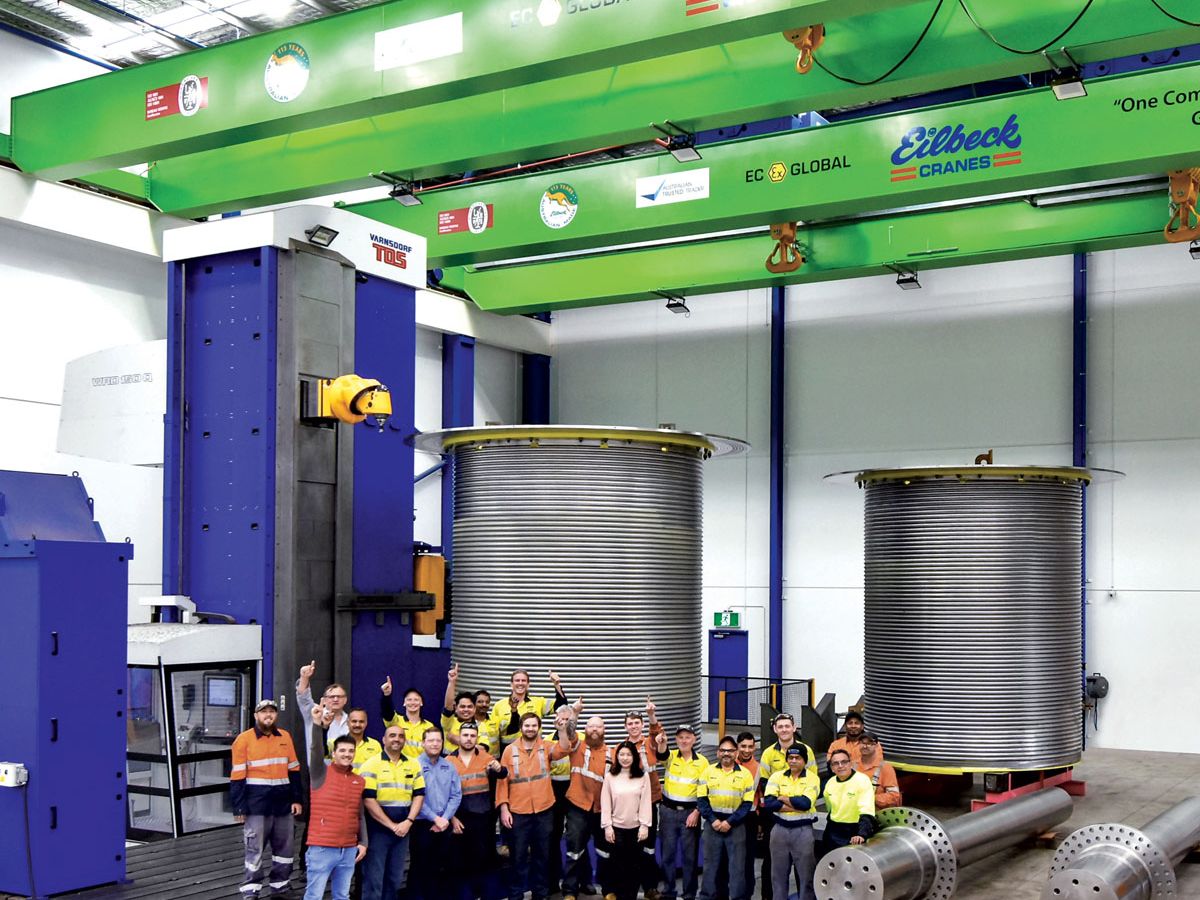 The Eilbeck group has been making cranes since the 1980s, after Tom Eilbeck bought it from his father as a single-person operation making fencing wire.

Charlie is the fourth generation involved in the business, and if he succeeds his father, he will be the first non-Tom to run it. The first Tom, who was also one of the first engineering graduates from University of Western Australia, began T Eilbeck & Son in 1907 as a blacksmith operation on Western Australia’s Swan River.

Rather than being a departure from crane-making, Eilbeck says it’s a return to the machine shop business his family operated for a couple of decades beginning in the 1960s and then moved out of. There’s even the occasional reminder of that era, when machine tools were something the company produced.

“Sometimes we’ll get a call up now from an extremely old person, somewhere, with a 50-year-old Eilbeck Cranes band saw or machine, asking if we’ve got spares,” he shares, with a pause for effect. 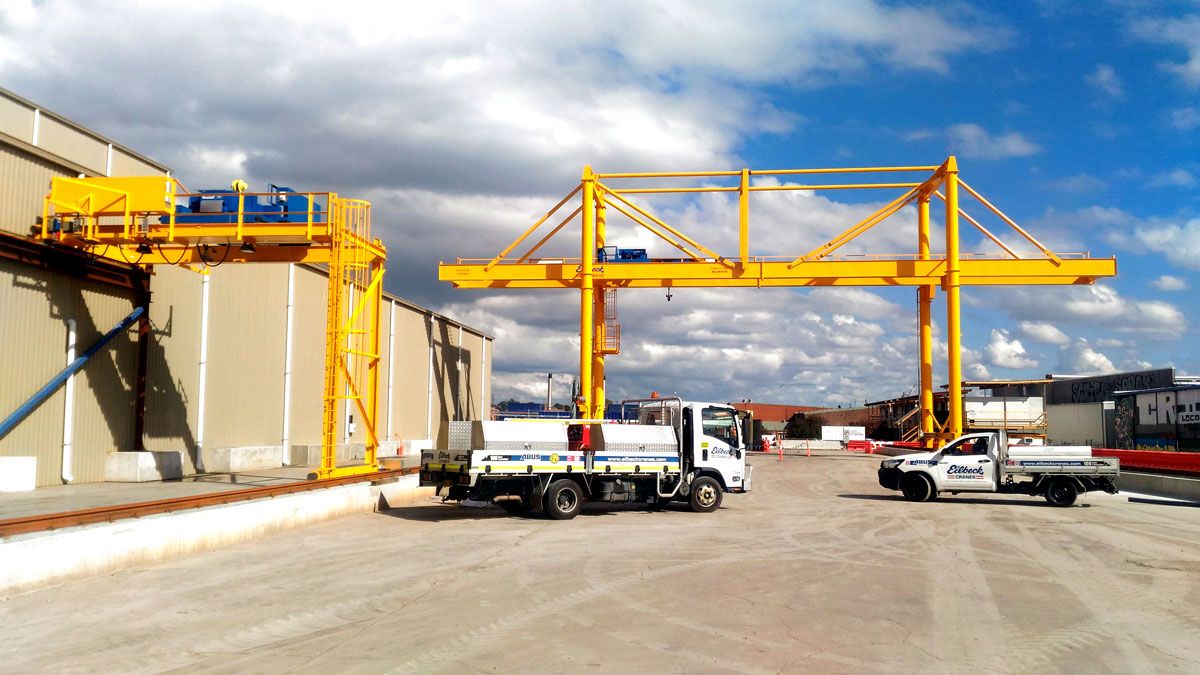 In November 2021, the 10,000th Eilbeck crane was installed. The group’s headcount has grown to 350 people, with manufacturing operations at eight sites.

The younger Eilbeck credits the expansion to his father’s drive, with an important relationship with ABUS Crane Systems of Germany – which provides hoists and other accessories that feature in the customised cranes by Eilbeck – in the background.

“Thirty-two years ago, my old man flew to Germany. He’d never been on a plane before,” explains Eilbeck.

“And he [stayed in] this person’s office until they gave him the Australian agency."

“And we import that kit from Germany. So when you go out there, have a look up and you’ll look at a green crane with blue products on it. The blue products are a mechanical kit which we buy out of Germany, bring here, and plug into our cranes.”

Flagship projects include the first 500-tonne and 250-tonne cranes built in Australia, used on the Westgate Tunnel, with different components created at the company’s workshops around Australia and then assembled onsite. 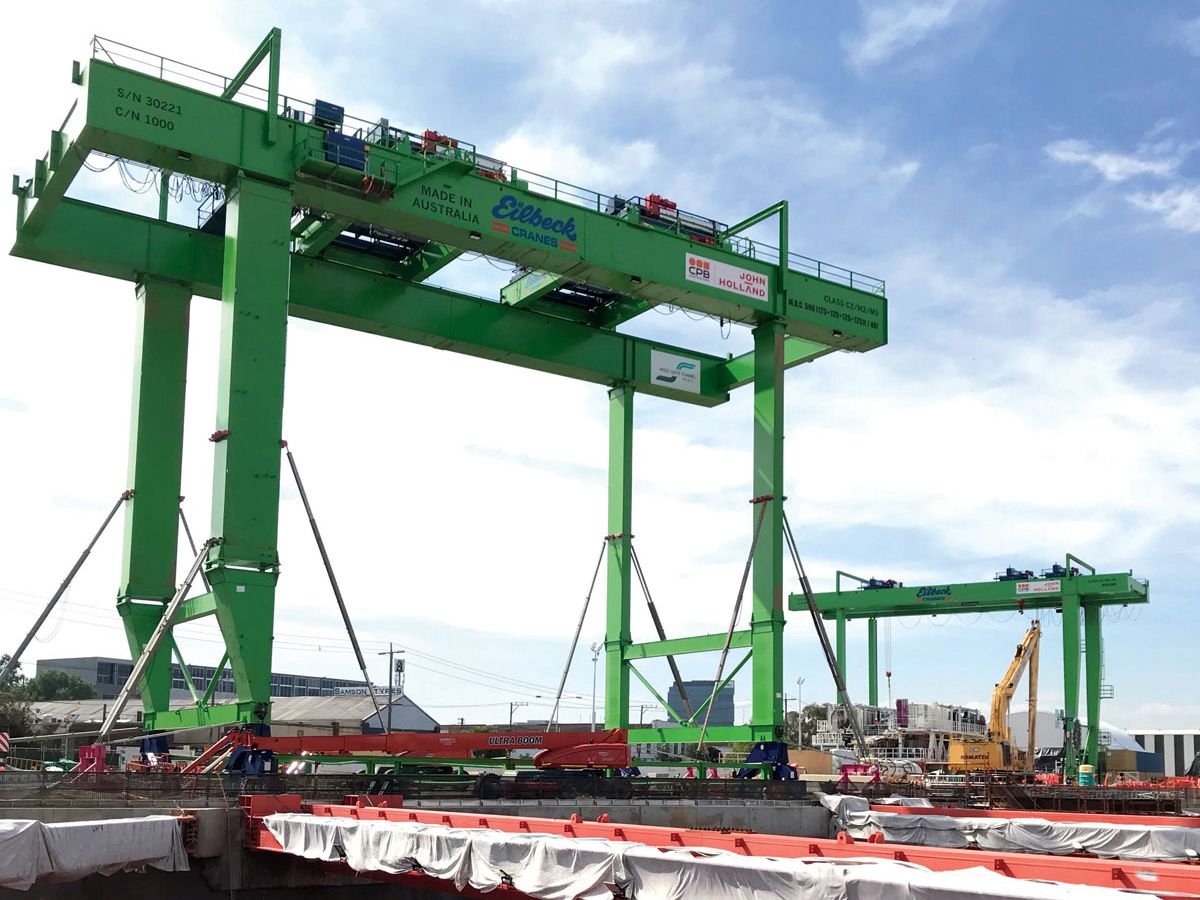 “There’s so many tunnels going on, basically at every train station where they’re digging a hole… And we’ve [only] lost one tunnelling contract in Australian history,” says Eilbeck.”

“Those cranes didn’t work, so we’ve won every crane since then. All these tunnelling cranes: and these shops allow us to do that.”

At the time of writing the company is preparing to break ground on a new fabrication shop at Moss Vale, which will be used to assemble slab handling cranes for Bluescope. These were previously imported.

“Back then we couldn’t make those cranes here, and nobody else could either,” Eilbeck adds.

“With the factories we’re building, with the machines we’ve got, we can.”

A further heavy machining and assembly site is under construction at Henderson, WA, with opportunities in mining, defence, and marine infrastructure.

“In the Australian market there’s a huge need and a growing need for heavy engineering companies.”

Part of what’s made Eilbeck successful in making a growing number of crane-related and other products in-house has been the expansion of its engineering team, based in Sydney and standing at about 35. 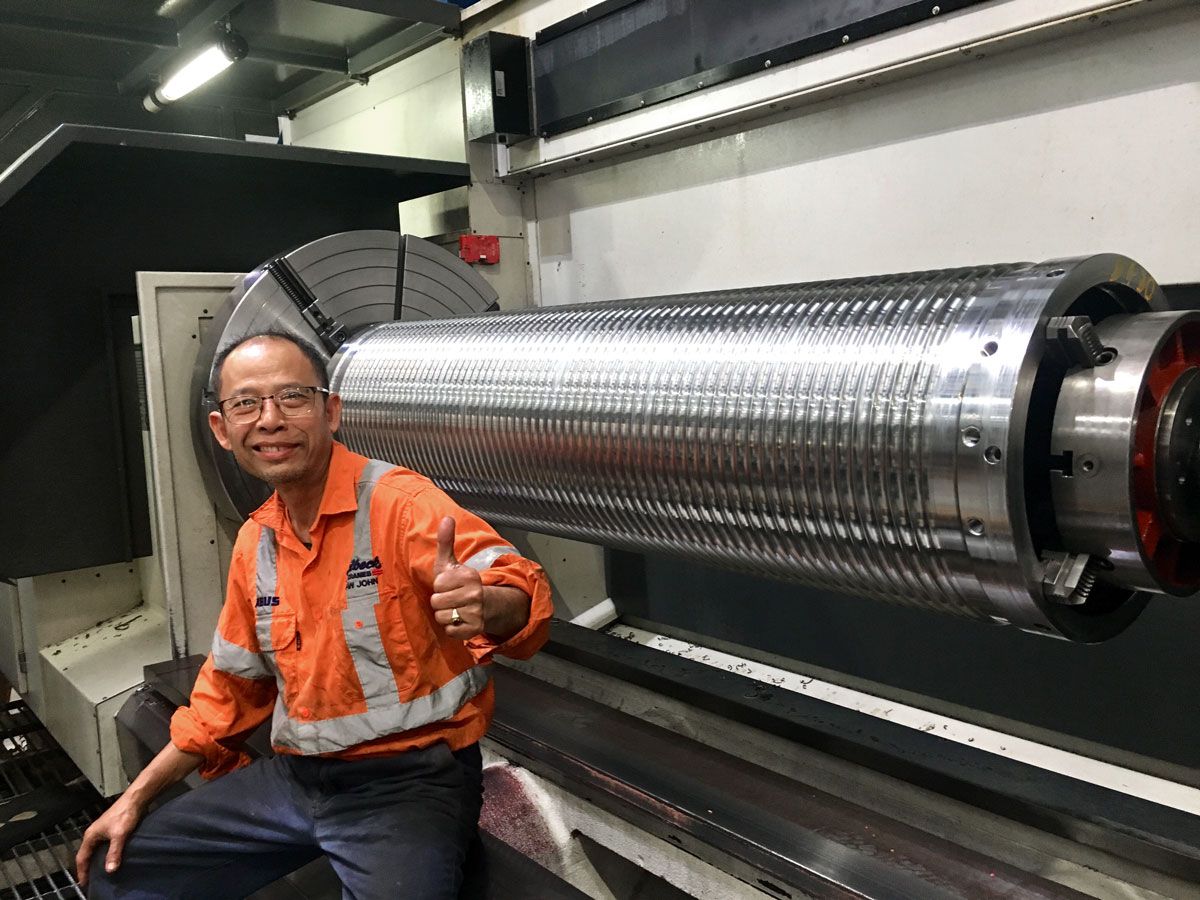 “We have flexibility to design what people want. All those wheel blocks behind you? They’re a bit of an odd size that wasn’t available on the market. So they’re all going to a customer in Panama. A simple product, but we can export.”

While engineers of various disciplines are highly-respected at Eilbeck, it’s impossible to miss the enthusiasm for tradespeople – unsurprising given Tom’s and Charlie’s training as boilermakers.

The tour rolls up to a Goratu GT5 G4 flatbed lathe, which a second-year apprentice would be operating if he wasn’t at TAFE. It is used to build between 100 and 150 rope drums a year, which in a previous era would be subbed out to other Sydney shops.

“We don’t have mass production or commonality here, so every tradesman is a skilled operator. They write their own programs,” explains Eilbeck.

“One of the biggest problems we face is finding skilled tradesmen. Probably 50% of our workers are imported on visas, and we’re continually bringing people in.”

The growing machinery collection has opened the eyes of the company, especially its engineering team, to what can be made in-house. At the same time, you need capable operators that can run it.

Despite local challenges around skills, Eilbeck is bullish about bringing more and more work in-house, and will continue to invest so it’s able to.

Tom – who lives in Thailand yet manages the Australian business 15 hours a day – sees his company as his baby, according to Charlie. His father would much prefer to put profits back into the business rather than property or cars.

The site tour is for a meeting of the Nuclear Skills Forum, which EHM is a participant in.

Eilbeck believes “the lifting opportunities around nuclear are huge” and is eyeing the potential of contributing to the sector. The hope is that whoever helps build the upcoming submarine fleet will share their IP, and that local manufacturers will get a chance to contribute.

“With the flexibility of the machine shop and the engineering that we have, we can definitely provide a lifting solution,” he affirms.

“On the other side of the fence, for Eilbeck Heavy Machining there’s huge opportunity. Obviously everyone’s talking about nuclear subs, and there will be a push to make components here. Hopefully we can assist with making the bigger ones. If someone wants to make a prop shaft here, which is 12 metres long, and they believe in us, we will buy the machine to do it to create that opportunity here.”

The event is in the lead-up to the election being called, and the expectation exists that sovereign manufacturing capability will feature heavily. Whether or not it leads to more opportunities to supply big infrastructure, defence or other projects remains to be seen. 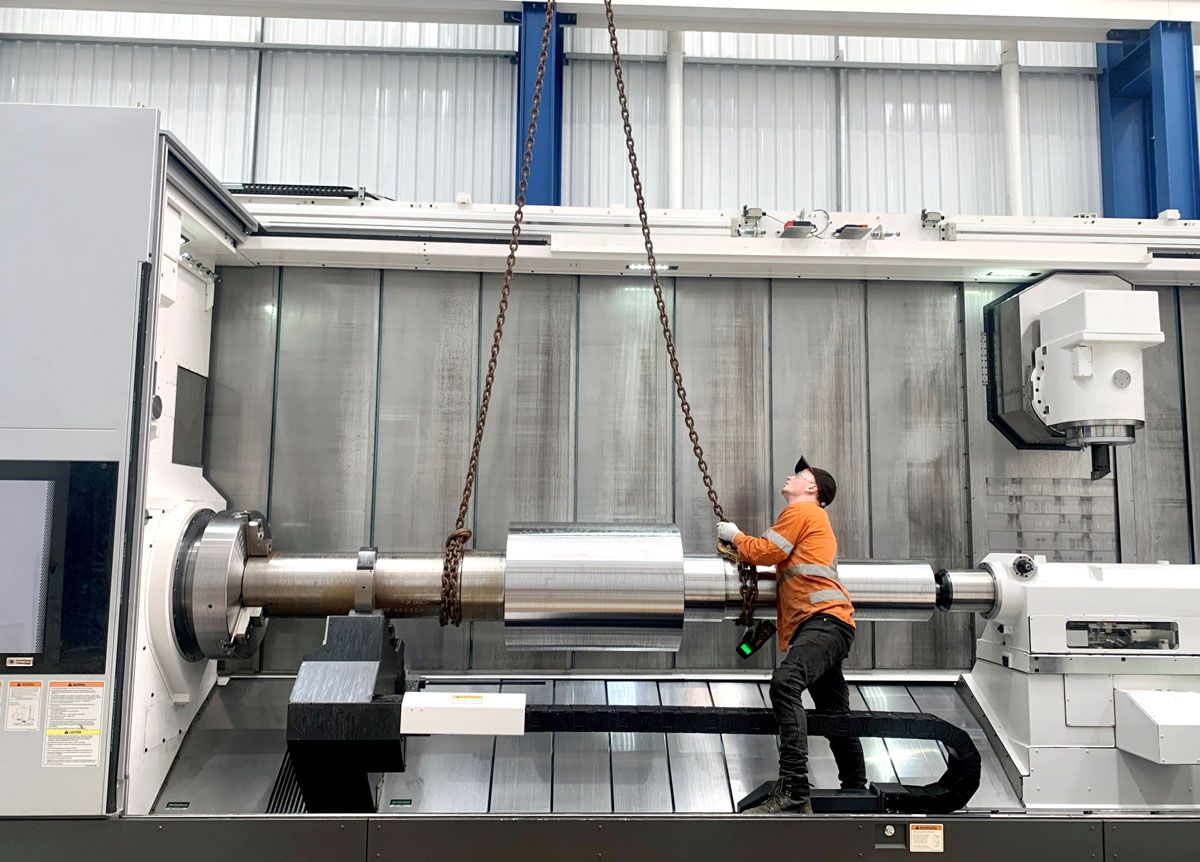 For Eilbeck Cranes, there is no choice other than to continue backing themselves – hurdles around skills or anything else be damned.

“The machines are hungry. It’s going to take a lot of infrastructure in Australia and a drive by Australia to be able to keep the big machines full, but with what’s happened in the last couple of years, there’s a great push for Australian made,” says Eilbeck.

Charlie Eilbeck heads the machining business of Eilbeck Cranes, the parent company which commands 75% of the bespoke…

It’s a busy time at Eilbeck Heavy Machining Centre with machines running around the clock 24 hours 6 days a week.

Utilising the Full Potential of Our Large Machining Centres

Investment and Innovation Key to Success for Eilbeck Machining

Eilbeck Heavy Machining were chosen for the machining of 6 off Mechanism Housings for a local Engineering Company.

This job was extremely laborious, and called for a very stringent fabrication and machining process. The tongs were…

Eilbeck Cranes’ Machining Centre has started off the year with large prospects, and a strong vision for what the year…

This machine advantageous as Eilbeck having many large & heavy components needing to be machined on our 9.5m bed mill or…

As we are approaching the end of the year, Eilbeck Machining is far from slowing down. The machining workshop is now…

As we are approaching the end of the year, Eilbeck Machining is far from slowing down. The machining workshop is now…

Big Machines, Big Capabilities and even bigger ambitions, Eilbeck leaps for sub-zero conditions in the Russian-Arctic

The Need for Speed

Eilbeck Cranes is very proud to have secured a contract to supply some of the fastest, and possibly most powerful and… 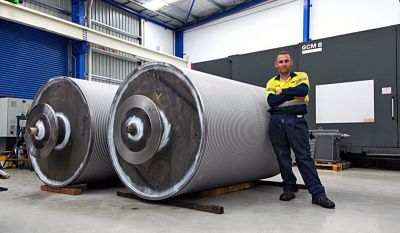 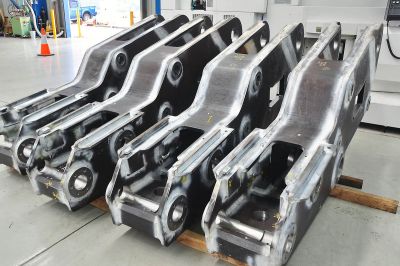